Joan Hummel is the winner of the October Hospice Caregiver Award, presented by Horan & McConaty.

She was nominated by Gretchen Norman who had the following to say about why she nominated Joan.

Joan Hummel is not only an amazing bereavement counselor, she is an amazing co-worker. She is a wealth of knowledge with resources, history, procedures and policies within our company, the community and the world in general! She exudes compassion and is the model of having an all accepting, strength-based approach to our bereaved family members and to our staff. 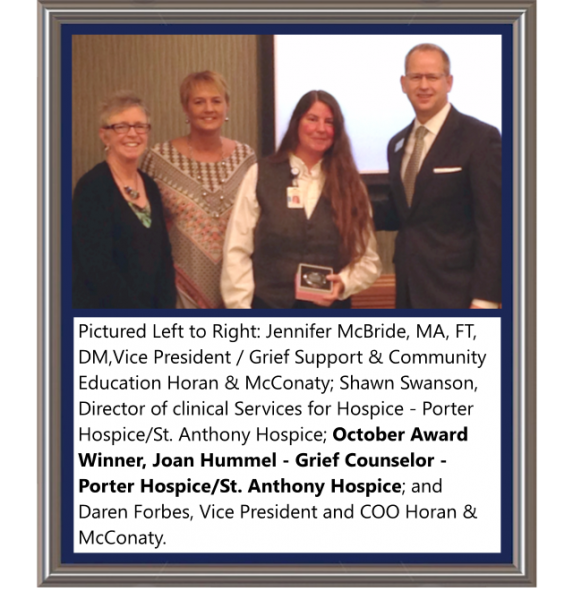 Recently, it happened AGAIN in one of the grief groups I was facilitating. Joan’s name got brought up by one of the participants who is seeing her for individual grief counseling. Several other people in the group perked up as they are being followed by her in bereavement. I added that in years past, having my office next to Joan’s office, I would hear such robust laughter during the sessions that it was hard to believe something as heavy as grief counseling was going on in there. Joan later explained they talk about a lot of things, some very funny things – perhaps as a way of keeping the grief in perspective I imagine. In my group that night, there was such enthusiasm and faith that this ‘miracle worker’ named Joan would be there for them to deal with the grief. And I know Joan, she will!

Thank you Joan for your commitment to those you serve!

Each winner will receive a gift card that can be used for whatever the recipient decides and an award.

Do you know a Caregiver? Nominate them today! 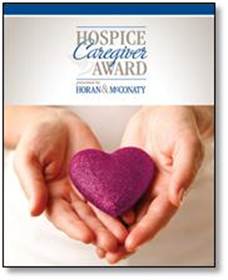 CLICK TO NOMINATE A CAREGIVER ONLINE OR FOR A NOMINATION BROCHURE